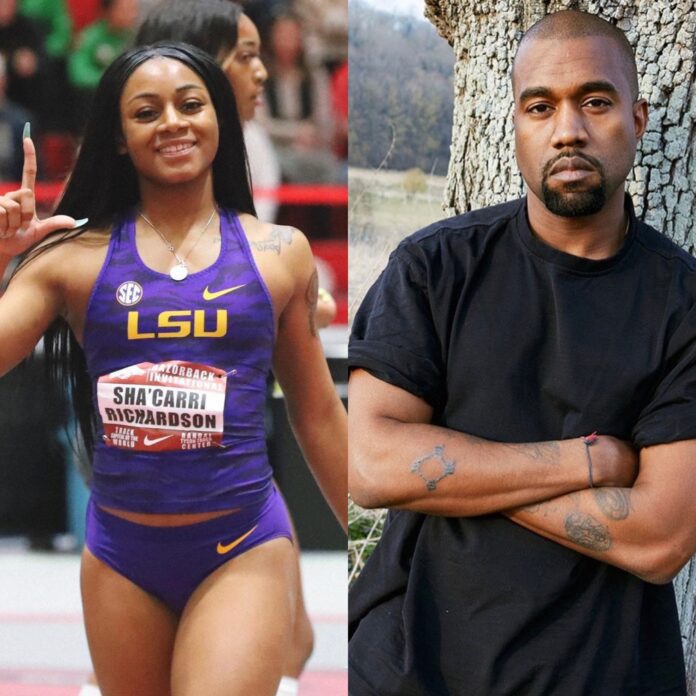 “No Child Left Behind” is a new track by Kanye West from his forthcoming album DONDA, which is set to be released on Friday.

This is what Sha’Carri posted to this caption to Instagram:
There will be ups and downs in life, but it’s important to remember to RUN YOUR OWN RACE. Love to @beatsbydre and @kanyewest for the support. Another commercial and another new Ye song dropping tomorrow! DONDA out on Friday! Let’s goo

Then shared this video:

According to People Sha’Carri Richardson may not be running in Tokyo, but she is sprinting across television screens.

The 21-year-old, who made headlines in June during the Team USA track and field Olympic trials, stars in a new Beats campaign, which debuted during Game 6 of the NBA Finals on Tuesday.

The ad, which shows Richardson running 100m in stylized slow motion with red Beats Studio Buds earphones and matching hair, also debuts a snippet of Kanye West’s new song “No Child Left Behind” from his forthcoming album DONDA, which is set to be released on Friday.

“Love Your Truth,” the tagline reads before an announcement about a DONDA listening event which will be on Apple Music’s livestream one day before the album’s release.

Sis is getting it, and we love to see it. Watch the Ad below:

Twitter is super excited for a new album, most confirm that we might just get the old Ye back, but time will tell.

This was a great collab!

Jimmy Kimmel Admits His Emmys Stunt During Quinta Brunson’s Speech Was A Mistake: ‘It Did Take Away’