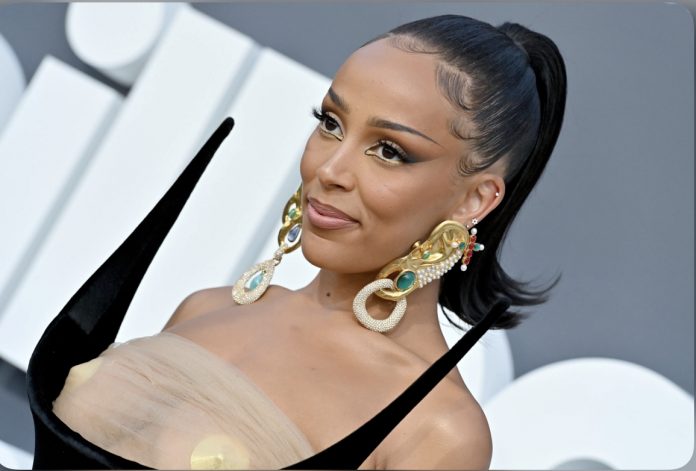 Grammy-winning artist Doja Cat claimed that Twitter is not allowing her to do any replys.

twitter isn’t letting me reply to anything now pic.twitter.com/P5U1ZGM1Cv

prior to this Doja was in the middle of a few heated exchanges on the app where she expressed her frustration with people’s stupidity.

According to Complex, it was unclear what made her say that but it invited more critics who called her cynical and ungrateful.

“Can you please grow up lmao,” one person replied. “All you do is come online and rant about stuff. It’s never anything positive or being grateful. Just constant negativity, it’s so embarrassing and sad tbh.”

The 26-year-old hitmaker clapped back by calling the user a “nerd” and flatly telling them to “shut the fuck up.”

The user went on to claim she “loved” Doja, and asked the artist to stop feuding with fans who dared to criticize her. “Doja…. Girl… we love u lmao.. u don’t gotta come at us,” they wrote.

Doja replied, “Ur being a cringe ass nerd please stop.”

Others suggested Doja’s criticism was nothing more than projection. One user pointed to her series of controversies, suggesting she was in no position to complain about the behavior of “dumb” people.

After a few more tense exchanges, Doja shared a screenshot that showed she was no longer able to reply to tweets. Her draft folder showed several tweets with a “failed to send” alert. One read, “find a new hobby you fucking ghoul,” and another proclaimed “you’re obsessed with me you fuckin dog, find another hobby.”

Doja Cat has faced multiple scandals over the years, including her recent DM drama with Stranger Things star Noah Schnapp, as well as claims she was friends with white supremacists. She denied the latter allegations in an Instagram Live broadcast defending her pals.

“They love me, I love them. They’re loving, and that’s it,” she said about the friends in question. “And you won’t find anything on them because you’re fucking stupid. Your actions are stupid. You may not be stupid, you may be smart. But your actions are not telling. It just is what it is. You guys are fucking disappointing. This isn’t how you combat problems. And if you think it is, then you need to grow the fuck up, and I’m sorry. I’m sorry that you suck right now.”